With Christmas and New Year’s Eve around the corner you may be planning to host a gathering of family and friends that will include alcohol. If you are, it’s important to know that you could be legally responsible for the actions of your guests who drink alcohol. This blog post explains why a recent Ontario Court ruling could hold you liable for your guests’ behaviour. We’ll also give you some ideas on how you can lower the risks associated with drinking.

Canada, in particular, has a problem with drunk driving. According to a recent study by the American Center for Disease Control, drunk driving is the cause of more motor vehicle accident deaths in Canada than any other developed country in the world. Impaired driving is the cause of 34% of roadway deaths in Canada, compared to just 6.8% in Austria, 6.2% in Japan, and 3.2% in Israel.

Canadian courts have yet to find a social host holding a BYOB party liable for the actions of their guests. In 2006, the Supreme Court of Canada decided in Childs v. Desormeaux that the host of a simple BYOB party did not owe a duty of care to third party motorists. The decision meant that social hosts have not had to worry about being liable if an intoxicated guest caused injury or death on the road. However, a recent Ontario Superior Court ruling on a preliminary motion has created some uncertainty around social host liability. The case is explained briefly below.

Dean was 18 when he attended a party monitored by his friend’s parents, Mr. and Mrs. Froom. Dean was engaging in underage drinking like others at the party. Mr. and Mrs. Froom did not supply any alcohol, but were aware there would be drinking as it was a BYOB party. The Froom’s evidence was that they supervised their guests throughout the party. At no point were any of the underage guests asked to stop drinking.

Later in the night, Dean drove over a fire hydrant and smashed into a tree. Emergency personnel transported Dean to a hospital where doctors discovered he had a blood alcohol content of .274, more than three times the legal limit. The accident left Dean a quadriplegic.

Justice Matheson found that the different facts in this case meant that the ruling in Childs did not necessarily prevent a finding that the Frooms owed Dean a duty of care. As a result, Justice Matheson dismissed the Defendants’ preliminary motion.

It is important to note the Court’s ruling on this motion is not a final judgement in the case. The significance of the ruling is that it leaves the door open for a finding at trial that the Frooms bear some legal responsibility for Dean’s injuries.

What Can a Social Host Do?

After reading about this case it’s likely you haven’t decided to abandon your Holiday party plans. So, what can you do to lower the risks of hosting a social event where alcohol is consumed?

You should provide water and other non-alcoholic beverages at your event so guests stay hydrated and don’t consume alcohol just because there’s nothing else to drink. It’s also important to keep an eye on your guests. By knowing who has been drinking, you know who you need to ensure gets home safely.

Don’t let an intoxicated person drive home. There are many alternatives to driving home after too many drinks. One idea is to have a couple of couches or beds available in case someone drinks more than they planned. Another option is to call an uber or taxi. You can also coordinate rides for with other party guests. A newer solution is You Drink, We Drive services. These services have someone dropped off who can drive an intoxicated guest home in their own car.

These are simple steps a social host can take to minimize their legal liability risk. But really at the end of the day, you should be taking these steps regardless of whether you could be liable for your guest’s injuries. Regardless of legal issues, no one wants their friend or family member to end up in Dean’s situation. So, if someone looks like they are going to make a bad decision, stop them. An awkward conversation, or the inconvenience of having someone sleeping on your couch, is a small price to pay to ensure your guests live to see your next New Year’s Eve party.

Be safe and have fun!

Would you like to learn more about personal injury law in Ontario? Visit our website and request your free copy of Bill Teggart’s best selling book “From Trauma to Trial: A Step-by-Step Guide to Ontario Personal Injury Law”. Alternatively, you can purchase a copy on Amazon.ca. 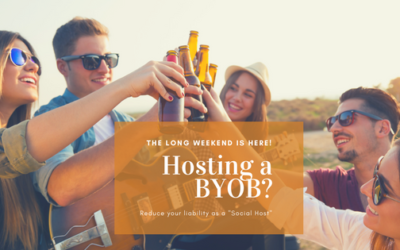 With May long weekend and beautiful weather fast approaching you may be eagerly preparing to host family and friends for a barbecue, some games, and maybe a BYOB party. If you are, you should know …

Hosting a BYOB Party? Protect Yourself and Your Guests Continue Reading >