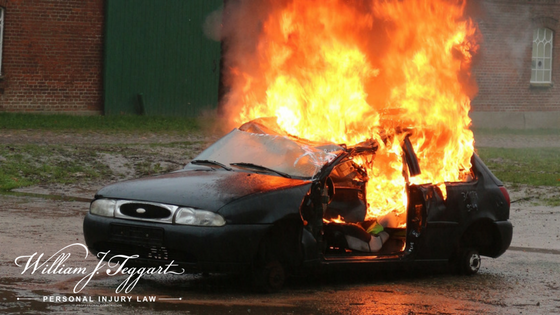 I have to be brutally honest. Ontario’s car insurance system is going up in flames. I want to tell you what happened, why it happened, how it’s affecting injured people and how lawyers are reacting. I’ll also give you advice on how you can protect yourself and your family. Finally I’ll confide in you my own very personal thoughts and plans in light of Ontario’s failing car insurance system.

Over a year ago now, car insurance companies won yet another battle against the people of Ontario.

Their win resulted in the most drastic changes in car insurance I’ve seen over my 20 year career. Insurers convinced the government to slash benefits to catastrophically injured people by $1,000,000. Yes, there are six zeros there. Likewise, they made it even more difficult to qualify for higher level benefits available to those suffering a catastrophic impairment. To top it off, the government cut benefits by 10’s of thousands of dollars for people suffering serious but not catastrophic injuries.

People ask me why insurers won and win almost every battle against the people of Ontario. There are a lot of reasons no doubt, some of which I am probably unaware of, but for me, it really comes down to two main reasons.

The first reason is that the insurance lobby is one of the top 3-5 political donours in Ontario. Take that for what its worth.

The second reason is that insurers always have the hammer. The hammer they have is the cost of car insurance premiums. Everyone thinks they should be paying less for car insurance. It often becomes an election issue. Politicians promise lower premiums. Insurers say they can’t afford it because the system is too rich. They threaten to leave the Ontario market. Their solution is to slash benefits. Politicians sell it to the public in well packaged talking points about how the changes are all about “personal choice” and how rich the Ontario system is compared to other provinces.

And heck, what’s not to love about “personal choice” right? It feels liberating. But people clue into the bait and switch when their insurance premiums don’t go down, or when an accident happens. The secret is contained in that overly complicated car insurance renewal slip your insurance company sends you. You don’t have the same level of benefits as you had before.

I explain what has happened for people by analogy to the airline industry.

It used to be that when you bought an airline ticket, the price included your seat, your baggage, your carry on bag and a meal. But people didn’t like the high cost of flights and the airline industry responded.

Now, if you buy an airline ticket, the price only includes your seat. You pay for your bag. You pay for food. I recently read, we will soon be paying for our carry on bags. That knapsack – twenty bucks!

The standard car insurance policy is now like that airline ticket you bought. The price includes a seat. That’s it.

It has now been long enough to assess how the changes are affecting injured people. We are beginning to see the fallout. In short, seriously injured people and their families are being hit hard.

Now, to be fair, these changes probably don’t impact individuals who suffer a minor whiplash injury in a car crash and go on to an uneventful recovery.

That’s the rub. These changes disproportionately affect our most vulnerable seriously injured population. The people who need the medical and rehabilitation money the most. I can’t help but think of the following quote:

Who is bearing the brunt of these changes? Families. The care for an injured person is being downloaded to families. Our OHIP system (ie. you as a tax payer) is also bearing some of the costs. But families are suffering because the reality is that the OHIP system was already overburdened.

We are now beginning to see how the changes are translating for the legal profession.

We see plaintiff lawyers leaving the profession, retiring early and shifting the focus of their practices to other areas of law. Many legal conferences tailored to personal injury lawyers include a focus on a “diversified practice” because lawyers can see that the work is just drying up and will continue to dry up due to driverless cars. What may have been “a case” a number of years ago is no longer feasible to take on.

I get it, you probably don’t have much sympathy for plaintiff lawyers. But I don’t cite what’s happening for sympathy. It’s just a symptom of what has happened in the car insurance system.

Insurance defence law firms haven’t been left unscathed .  We see firms that used to have 40 lawyers shrinking down to 15. We see early retirements and shifts to other practice areas.

Now, for private insurance defence firms, I expect there is another factor at work as well. That is, some insurance companies have stopped using private firms in favour of less expensive in-house legal teams. Whether this will work out for them in the long run – only time will tell.

What You Can Do To Protect Yourself and Your Family

So with the system collapsing around us, what can you do to protect yourself and your family? Unless you are independently wealthy, you should buy optional car insurance benefits. Full Stop.  Otherwise, you will find yourself in that cycle where you can’t work and can’t afford the rehab you need to help you get back to work if you are seriously injured in a crash.

You can watch my YouTube VLOG if you want my thoughts on the The Top Two Car Insurance Companies in Ontario.

What Will I Do?

With lawyers leaving personal injury and insurance law, you may be wondering about what I am going to do.

Here is my answer.  I am not going anywhere! I didn’t get into personal injury law for the dreams of a Lambo, a Florida home and a cottage in Muskoka.

Why? It all comes down to why I chose personal injury law as a career in the first place. It goes back to my roots; My Dad and my background in sport.

My Dad – Stand Your Ground

My Dad taught me that some things in life are worth fighting for. My grandfather instilled this in my Dad which led to his successful career in policing. A simple but wise immigrant from Ireland, my grandfather is really the root of it all. He instilled in his five boys some values to live by. They were:

“Work Hard. Be Honest. Be Fair and Stand Your Ground”.

The “Stand Your Ground” part is what resonates with me when deciding how to react to situations in life like this. What my grandfather meant by “stand your ground” was that there are critical times in your life when you have to stand up for yourself and others. This is one of those times.

Sport – Standing Up For Teammates

My background in sport is the other aspect that guides me. Sport taught me about what it means to be a good teammate (see my recent blog on Key Characteristics of Great Teams). While my hockey career is long over, I still think of myself as a hockey player at heart. When I played the game and saw an opposing player stick it to one of my smaller teammates on the ice, I would make sure I took that player’s jersey number for later. Why? Because I am hard wired to stand up for people who need help.

Standing Up for Severely Injured People and Their Families

Why do severely injured people need someone to stand up for them in the legal system? Because they have never been through it before. The system is ridiculously complex and rigged in favour of insurance companies. Just as important, injured people need to focus on their recovery, not worrying about the mountains of insurance paper work or wondering whether the next insurance company letter will be an unfair denial.

So I am not going anywhere. You won’t see me on TV ads, or park bench ads, or bus ads. But I’ll continue to do my best, along with my great teammates Lane, Leanne, Sharon, Nicole and Nancy here at the firm, to bring value for you through our social media presence (on Facebook and Instagram), blog posts and VLOG’s on YouTube).

Most importantly, the system may be going up in flames, but I am going to continue to stand up for the rights of people that need help. My grandfather died before I was born, but I like to think he would be proud.