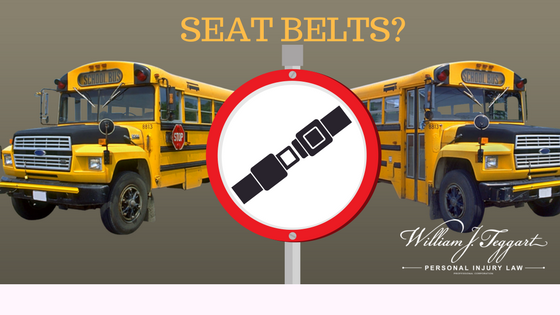 Have You Ever Wondered Why Not?

The Toronto Sun published a remarkable article last week that have some asking questions about why school buses don’t have seat belts. The Sun reported last week that a school bus driver crashed a bus carrying twenty students while allegedly impaired. After the bus crashed into a car, it continued bumping into the vehicle. The Toronto Sun article can be found here: http://ow.ly/QBGL30eVg6n.

While it was an unusual incident where thankfully no one was hurt, it revived an old question; why don’t school buses have seat belts? I can remember first riding a school bus on a field trip in elementary school and asking why there were no seat belts. My teacher told me you just don’t need to wear seat belts on school buses. That was enough for me. But I was reminded of this question when I recently saw a tweet which said something along the lines of: “Make sure everyone in your vehicle has a seat belt on, unless of course you’re transporting 30 school aged children.”

It occurred to me that with a new school year starting, and many parents kissing their children good bye at the bus stops all over the province, other people were probably wondering the same thing. On that note, this blog post will explore the official reasons as to why seat belts are not needed on school buses. It will also examine whether those reasons make sense.

Why Seat Belts Are Not Necessary

The key to compartmentalization is that the back of each seat is padded and is a specific distance from the seat behind it. If the bus comes to a sudden stop, the padded seat back absorbs the forward energy of the child seated behind. Without a seat belt, the child’s body slides forward and hits the seat back in such a way as to distribute the force of the impact over the entire upper body.

The entire Transport Canada article can be found here: http://ow.ly/HaVD30eVgpp.

The Canada Safety Council is a non-profit organization dedicated to promoting safety. It agrees with Transport Canada that seat belts are not necessary on school buses. Their article on the issue (which can be found here: http://ow.ly/gv3E30eVgG2) outlines the four design elements of compartmentalization:

The Canada Safety Council also notes that travelling by school bus “is 16 times safer than travelling in a family car per passenger/kilometre of travel”. They say the enhanced safety of school buses is because of compartmentalization.

While Transport Canada and The Canada Safety Council list many reasons why it’s not safer to have seat belts in school buses, not all their reasons make sense.

16 Times Less Likely To Be Injured

The most obvious reason is that school buses are enormous. Of course a collision is less likely to injure a bus passenger. Who is going to win between a compact car and a giant school bus? Compartmentalization or not, I’ll bet on the bus every time.

Additionally, it’s pretty darn hard to miss a giant yellow school bus. Unlike motorcycles, which we noted in our motorcycle blog often go unseen by drivers due to their small size, school buses are next to impossible not to see. I doubt school buses get into as many collisions as regular vehicles.

The fact that children are 16 times safer in a school bus, while comforting, does not mean seat belts in buses would make children less safe.

The Safety of Compartmentalization

The theory that compartmentalization increases safety makes some sense. But does that mean three-point seat belts would make them less safe? Compartmentalization seems potentially effective in a collision where the children are either thrown directly forward or backward. But what if a vehicle strikes the school bus from the side? That would likely throw the children either into the un-padded side of the bus, or out of their seats. What about a situation where a bus rolled over? With no restraints, the impact would likely throw the children around the bus, hitting the sides and roof. A three-point belt would likely keep them safely in place.

Another problem with compartmentalization is it only works if children are sitting properly. What if a child is sitting partly in his or her seat, and partly out of the seat? They may not neatly strike the seat in front of them, and instead go flying down the aisle.

Why Else Wouldn’t the Government Want Seat Belts

Why, other than making school buses less safe, would the government be hesitant to put seatbelts in school buses?

“Another type of seat belt is the three-point belt, also called the lap/shoulder belt. While this system is available, it would require structural design changes to the interior of many buses. However, safety is the main issue.”

By saying three-point seatbelts “would require structural design changes” Transport Canada implies that cost is a concern. The changes to buses would likely include retrofitting buses with new seats which would better support a three-point belt. It would be very expensive to retrofit an entire fleet of buses.

To me, it certainly seems that that adding three-point seat belts to school buses would make them safer. Having said that, it is also clear that school buses are a very safe mode of transportation. In fact, a child has not died from a school bus crash in Canada since 2008.

What do you think? Would seat belts make our school buses safer? Let us know your opinion on our Facebook page.